Most of the medieval City of London was swept away by the Great Fire. The rebuilding process took over 40 years.

What were London’s streets and houses like before the fire?

The City of London was full of narrow streets and wooden houses.

Before the fire: a wooden tinderbox

While brick and stone houses did exist, many houses were made of wood and leaned over into the narrow streets.

Before the fire: work and home

Most people lived in the same buildings as their businesses so homes often included shops, workshops, industrial premises and stores.

Before the fire: a religious capital

Did you know? There were 109 churches in the City of London before the fire.

Buildings affected in the fire

13,200 houses, four-fifths of the City of London and 436 acres were destroyed. Which important buildings were affected?

The first church, St Margaret Fish Street Hill, caught fire overnight. 87 churches were to be destroyed by the fire.

Cheapside, one of the City of London’s most important streets, began to burn.

Guildhall, the centre of government in the City, caught fire.

A fire broke out on the roof of St Paul’s Cathedral.

Once the fire was over, rebuilding seemed like the perfect opportunity to completely change street layouts. In reality a less dramatic approach was taken.

King Charles II said the City should be redesigned to prevent another fire - but he wanted regulations in place first.

Many rebuilding plans were proposed but none were ever used.

The First Rebuilding Act set out guidelines for how to rebuild houses.

The City authorities laid down several rules for rebuilding. New houses had to be faced with brick or stone.

The Second Rebuilding Act set out guidelines for rebuilding churches and public buildings.

The Guildhall was rapidly restored, although it was remodelled in 1862.

Much of the rebuilding work had now been completed.

The Monument was opened.

A memorial plaque was set up on the house rebuilt on the site where the fire started.

You have reached the end of the story: Streets and buildings 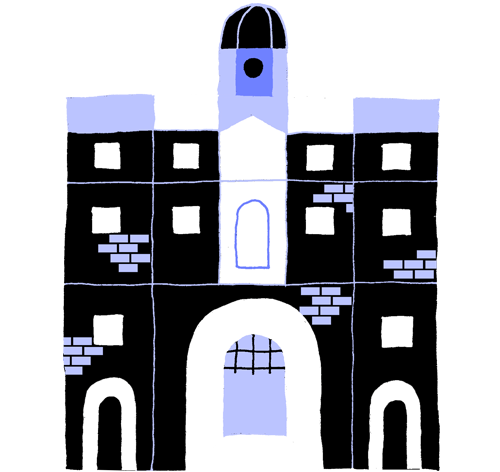 Prisons during the fire

Three of the City of London’s prisons were destroyed by the fire. Prisoners were released or moved elsewhere, although some escaped.

Poultry Compter was the first prison to catch fire, during the night of Monday 3 September. Compters were small prisons for people who had committed minor crimes such as drunkenness. The prisoners from this prison were released.

On Tuesday 4 September, Wood Street Compter was destroyed. It was later rebuilt.

The same day, the prison at Newgate was badly damaged and the prisoners were marched out under armed guard. They were taken to Southwark, although some escaped.

Also on Tuesday, the Great Fire surrounded the area of Ludgate. This City gate doubled as a prison for people who could not pay their debts. The guards fled, but first opened the cells so that the prisoners could escape.

Later that evening, another debtors’ prison, the Fleet, was destroyed. The prison warden, Sir Jeremy Whichcote, took the homeless prisoners to Caronne House in Lambeth. After the fire Sir Jeremy paid for the prison to be rebuilt with his own money.